The Bill and Melinda Gates Foundation: Are They The Gangster Godfather? 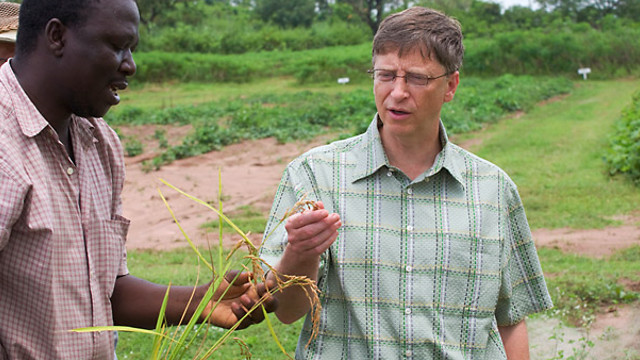 The Gates Foundation is funding a campaign to “end world hunger” by promoting GMO technology, the organization has hired 400 “science ambassadors” to influence agricultural policy in 35 countries, donating $15 Million to Campaign pushing GMOs on small Farmers around the world.

Feeding the world’s population is an honorable profession, yet, when you have the Godfathers of Eugenics involved on farmlands across America and on foreign third world soil, partnered by the likes of Monsanto and the United Nations, you know there is a deeply rooted and nefarious agenda.

Scientists have discovered the adverse long time health risks with eating GMO’s, and the human bodies inabilities to digest this fake food source, but probably the most devastating crime of all is the fact that GMO foods will sterilize and change the structure of human and animal DNA.

The mission statements and narratives are written to confuse those in search of hope, wolves in sheep’s clothing, herding their cattle to the slaughter and the end game is to sterilize the population by the year of 2030? Why else are these entities doing business with global governments and private corporations?

It’s no secret that Bill Gates and his Father are proponents of Eugenics and hence the reason for them to provide third world countries with genetically modified foods for sterilization of the masses because they don’t believe impoverished nations should procreate. The people in these countries are not science experiments of Meta-Trans-humans and don’t deserve to be treated as such.

The Bill and Melinda Gates Organization hired 400 science ambassadors to influence agricultural policy in 35 countries as they claim to “end world hunger” by promoting GMO technology to the tune of 15 million dollars to two global campaigns, both campaigns are headquartered out of Cornell University, and Americans wonder why our children’s minds are so apathetically indoctrinated by the likes of eugenics oriented billionaires and philanthropists.

The Gates Foundation’s website states that “All Lives Have Equal Value, We are impatient optimists working to reduce inequity,” they state, “WE KNOW, our resources alone are not enough so we work to change public policies, attitudes, and behaviors to improve lives. We partner with governments and the public and the private sector’s and foster greater public awareness of urgent global issues.

“Alliance for Science” was the first GMO partnership, created in 2014 with $12 million from the Gates Foundation, the second GMO partnership formed was “Ceres 2030” as in agriculture agenda 2030, with a price tag of $ 3 million. Created in 2018, to help the United Nations foster it’s goal of zero hunger by 2030.

According to Cornell University, the funding for the Alliance for Science will be used “to ensure broad access to agricultural innovation, especially among small farmers in developing nations”, hiring nearly 400 science advocates to promote the gospel of GMO’s in 35 countries.

They drive the narrative of the “urgent situation” regarding food security and the fact that many countries are experiencing agricultural damage caused by the environment. It’s no secret that Monsanto has taken over the worlds agriculture business with it’s weaponized agenda 21/30.

The Alliance has built a science allied force of more than 9,000, representing more than half of the world’s countries and every state in the U.S. The Gates Foundation started the Ceres 2030 campaign, naming it after the Roman goddess of agriculture, this non-profit will advise the United Nations on which investments and policies to make in order to achieve it’s goal of “Zero hunger by 2030”.

MSNBC’s Democratic presidential debate in Las Vegas got off to a rocky start, with most candidates t [...]

One of the nation's leading pro-life Christian activist organizations finds it "shocking [...]

'God Has Revived Me. I Am a New Man': Powerful Stories of Lives Changed in Ongoing TN Revival
19 February 2020