Welcome To The Home Of Illuminati Headquarters, I Mean, Denver International Airport 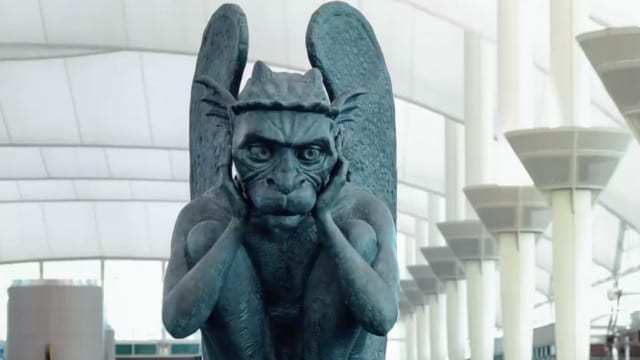 Urban legends are what redefine folk lore’s with an expressive body of culture, a true example of the X-files, this Denver International Airport nick named the “Illuminati Headquarters”.

One huge measure of mystique surrounding the funding of this major project, the Denver International Airport was privately funded and no one knows by whom!

Many question why it was built in the first place as there was already a fully functioning airport only 6 miles from the city. Some claiming it was built as a New world order sanctuary and defense bunker for the elite.

If you’ve ever been to the Denver International Airport, you understand the rumors surrounding the mystery and bizarre art work, It is so different from any other airport you’ve ever traveled through.

There are signs and symbols of another world within, greeted by a 32 foot, 9,000 blue mustang statue not so jokingly named “Blucifer”, who’s possessed with red laser beam eyes and said to represent the Fourth Horseman of the Apocalypse from the biblical book of Revelations.

During the final construction of this demonic statue, the artist, Luis Jimenez, was tragically killed in 2006 as the horses head fell and severed an artery in his leg.

Inside a chilling 40 piece collection of artwork depicting the world take over by an elite group with displaying murals of the apocalypse, expressing a Nazi influence, is a mural adorning a Nazi soldier with a gun and gas mask, and another includes a quote from a child who died at Auschwitz, many people question the messages of this art, is this in your face fact or scare- fiction?

Hidden within the airport is a Tile with a mining cart etched into it, in the mining cart are four letters “Au Ag” typically represent the elements of gold and silver, yet conspiracy theorist believe it represents a virus known as the “Australian Antigen”, which could wipe away the world’s population.

Walking through this gothic feeling, new world order headquarters stimulates the wildest foreboding thoughts of the imagination and questions of what lies beneath the surface of this alleged secret underground hub of sinister activities.

Rumors have it that a former airport construction worker claimed the airport has five multistory buildings and a complex network of tunnels beneath the airport, hence the reason they were behind schedule, combined with tales of Nazis and Aliens shrouding the image and character of this illuminati museum of an airport and don’t leave out the dedication stone of the Freemasons, another mind bending symbol of the New World Order and global government.

Dedicated on March 19, 1994, another contributing factor of mystique behind the DIA is the dedication stone which displays the Masonic symbol of a compass with a capital G inside and underneath the symbol is the “New World Airport Commission” which was credited with participating in funding and building the airport.

This Masonic symbol ties into the conspiracy as the secret fraternal society of Freemasonry is allegedly the largest in the world and has existed as far back as the middle ages, consisting of powerful people working together in secret to establish the agenda of a single global government. Conspiracy theorist have claimed the dedication date adds up to the number 33, which in Freemasonry is the highest level of power.

To add a nod to the conspiracy theories, the latest addition to the DIA is a talking animatronic Gargoyle who shouts out “Welcome To The Home Of Illuminati Headquarters, I Mean, Denver International Airport,” that begins to start a conversation with them. This expressive talking Gargoyle is a 24th Happy Birthday gift to this gothic navigation port, adding more mystique to it’s rumor mill.