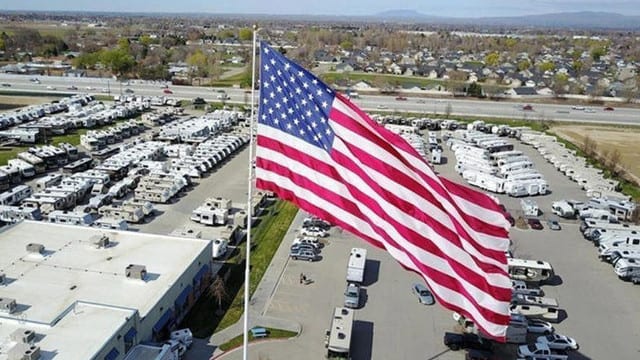 By Susan Price, Gold Star Mother & Analyst
[Originally posted on americaoutloud.com on May 23, 2019]

According to the “Stars and Stripes” the city of Statesville N.C. is suing an outdoor living equipment dealer, Gander RV, because they claim the 40foot by 80 foot Flag is too large.

The city is “imposing” a $50 per day retroactive fine, dating back to Oct 15, 2018. That’s when the flag went up, the store says. Officials claim the U.S. Flag is nearly twice the size of specification in city codes for “signs and other outdoor marketing devices”. The owners of the establishment posted on their website,

“Many cities like Statesville have requested that Camping World and Gander Outdoors take down their American Flags,” “This involves more than the flag itself and say “WE WON’T DO IT” Stand with us.

The American flag fly’s freely by the breath of every fallen American hero.

The morals and ethics of the city officials of this N.C. city are being questioned and debated that the city should change it’s ridiculous ordinance.

Marcus Lemonis CEO of Camping World (Gander RV) owner of over 200 across the country, states none of his other stores have had this issue, all adorning the same flag on their property which is not obstructing anything but the political view point of non patriots, the American patriots who either live in NC or are passers by from the view off I-77.

Maybe that’s the problem, this beautiful flag is a symbol and constant reminder of American freedom and just maybe the American people in the city of Statesville NC should sue those anti Americans trying to enforce and capitalize off of this most offensive act.

Camping World states “The flag is a symbol that represents this country” while members of the Statesville Council say the matter has nothing to do with Patriotism.”

Well opinions do matter and this NC Council is among the minority, have they no moral compass to realize this very flags stars, stripes and colors drapes the caskets of our fallen military sons and daughters as they return home to their final resting place to their Gold Star families one last time, have they forgotten that this very flag represents American hope at it’s finest as we salute it with out right hand covering our hearts and this very flag our troops insure rises in the morning and sets in the evening with pride and honor, is now finding its way under attack.

It is important that all Americans celebrate and honor the lives of those who are now a part of history⏤our fallen American heroes⏤who will NEVER be forgotten as they define the very fabric of America⏤this is the essence of Memorial Day. All across the nation we will celebrate this day filled with special tributes, parades, and services to honor and recognize those souls who have given up their today so we could have tomorrow.

Dobbs signals a significant retreat from the days when the Supreme Court creatively crafted imaginar [...]

The Supreme Court recently gave the cold shoulder to an American assaulted by a Border Patrol agent. [...]

The Democrats used their constitutional remedies against President Trump by impeaching him twice. No [...]

As Congress attempts to legislate away our 2nd Amendment right, the Supreme Court just put the Left [...]

But are Americans — and particularly Taiwanese-Americans — ready to buy what the party is selling? [...]

We praise God for such clarity and boldness from the U.S. Supreme Court.   [...]

Once Commodus, Nero, and Caligula terrorized their people; now it’s the rising generation of young p [...]

Not only are feminine occupational names being disappeared, but the word "woman" itself is [...]

The rise in school shootings correlates with the destruction of the family and the declining number [...]

Why Was Lady Liberty on All Our Original Coins?
25 June 2022

Perhaps we need to once again put Lady Liberty front and center back on our money, and in our hearts [...]

Is there a secret to a life of miracles and problem-solving? Here's the biggest life hack that [...]

A former Justice Department attorney believes the highest court in America did the right thing in a [...]

A pro-family activist says ballots from the 2020 presidential election amount to evidence of a crime [...]

Being pro-life in New York: Bombings in the street, bullying by the state
24 June 2022

A pro-life activist in New York state is demonstrating what it means to work behind enemy lines, whe [...]

Reaction is pouring in following today's announcement by the U.S. Supreme Court overturning the [...]

With Nebraska's state school board becoming the latest to leave the National School Boards Asso [...]

The pornography industry is showing signs that its illegal activities are finally catching up with i [...]

What if landmark ruling falls in New York but Dems didn't hear it?
24 June 2022

At about the same time a gun-rights advocate was predicting the Far Left will ignore the U.S. Suprem [...]

There you have it. Vice President Joe Biden says the government has the right to restrict gun owners [...]

The Hallmark Channel announced that it is now open to gay-themed Christmas movies, perhaps signaling [...]

Mypillow going to make face masks for hospitals across the country during coronavirus pandemic. MyPi [...]

Chuck Schumer Is Lying, He’s Only Fighting The Wall Because Trump Is POTUS
18 June 2022 - godfatherpolitics.com

Just as he has done with practically everything else since Donald Trump was inaugurated Senate Minor [...]

Surveillance footage released by the U.S. Customs and Border Protection shows a toddler being droppe [...]

A “We The People” petition demanding that House Speaker Nancy Pelosi be impeached earned over 100,00 [...]

Aging socialist Senator Bernie Sanders was widely ridiculed Tuesday for a video showing him taking a [...]

Hours after the Supreme Court struck down Roe v. Wade and returned the issue of abortion to the stat [...]

“This is a day for thanksgiving, and a day to rejoice, and to realize that prayers are powerful,” El [...]

For nearly 50 years, pro-life advocates have worked tirelessly to overturn the Supreme Court’s 1973 [...]

Democratic lawmakers called for expanding the Supreme Court and abolishing the filibuster following [...]

WASHINGTON -- After nearly 50 years of legalized bloodshed of unborn children in the name of women [...]

Photo Credit: Rudy and Peter Skitterians/Pixabay (The Christian Institute) -- A claim that Japan’s b [...]

Photo Credit: Pixabay/Pexels (The Christian Institute) -- Violent sex acts have been portrayed as no [...]