Let It Begin With Me 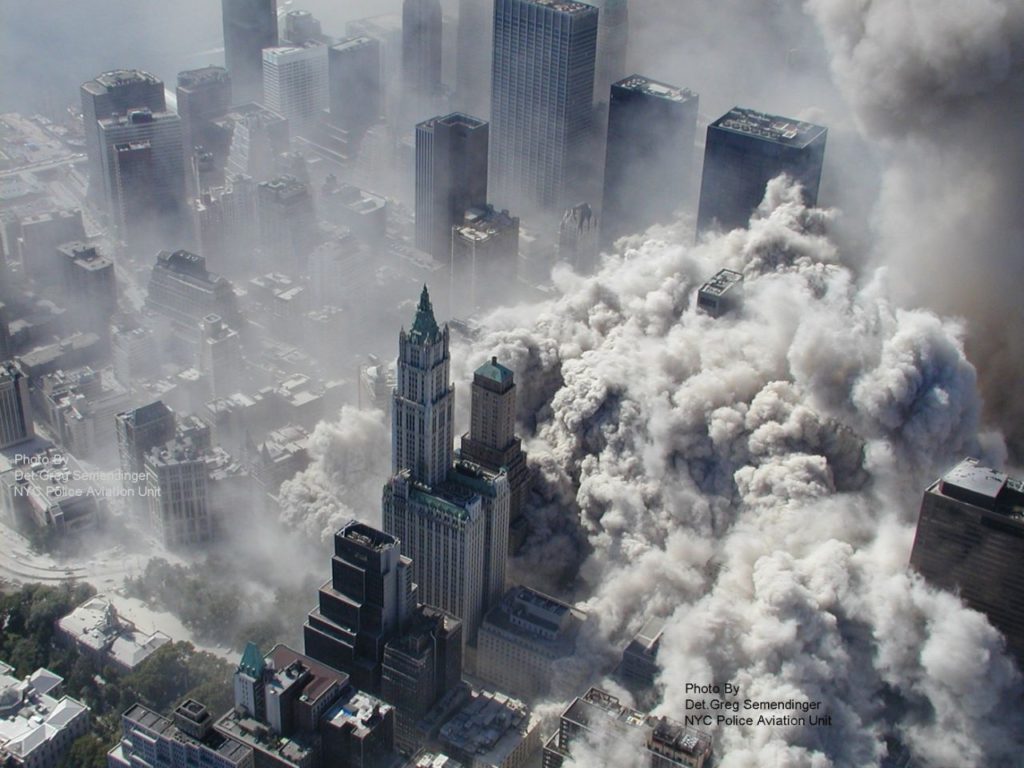 Above: A photo taken on Septemeber 11, 2001 by NYPD as the North Towere collapses engulfing lower Manhattan in smoke and ash. Photo by NYPD Detective Greg Semendinger

Immersed within a complicated deadline, I absent-mindedly changed the CD that I was listening to. I have always worked best with background music and today was no exception.

Suddenly, as the music permeated my office, I was overcome with enormous emotion. I knew the woman behind ‘the big voice’. I knew her very well. It was my friend, Yolanda. Yolanda Dowling.

Yolanda was a gifted opera singer that I genuinely respected and admired. Yolanda was also one of the 2996 casualties of the World Trade Center attack on September 11, 2001.

Unable to concentrate further on work, I became paralyzed with the heinous memories of that week. As though I was hypnotized, I turned away from my computer and began reading the scribbles within my journal.

Following are some unedited notes that I had jotted down weeks after that tragic event:

“Tuesday, September 11, 2001:
While I was watching the morning news, the television screen suddenly changed to images of utter terror: A plane had just struck The World Trade Center! At first, I thought it was a preview for a movie but it didn’t take long for my senses to accept that this was the real thing. Terror and despair gripped everyone.

Then, about 20 minutes later, a second plane crashed into The World Trade Center’s South Tower. As the entire world witnessed the collapse of both towers, it was clear that this was an act of terrorism and this was reality, not fiction.

While transfixed in front of the television, the World Trade Center had become a horrifying image of dense smoke and carnage right before my eyes. Terrified, I was witnessing my beloved New York in flames and under attack. Within a short time, New York had become vulnerable and shattered. I sat in shock feeling helpless and frightened.

With no entrance into Manhattan for those of us waiting, the only thing to do was to watch and pray. Along with millions of others, my heart ached for every person in and near the towers as well as for their families and friends. Were they safe? Were they alive?

Piece by piece, information was relayed to us about friends and associates. A very good friend who worked at Kemper Insurance on the 34th floor was relaying information from her cell phone to her husband who in turn called each of us.

Friday, September 14, 2001: As the days passed, all eyes and ears were glued to TV’s and radios. Having had no phone service. I began feeling very isolated and pensive. On the forth day after the attack, I was anxious and knew I needed to see the ruins for myself. I called two friends, who were visiting from Kentucky, packed my then 2-year-old daughter into the car and headed for Manhattan. My friends accompanying me were under the assumption that I was taking them sightseeing, but I knew better….

As I approached Manhattan, I shuttered as I sighted the financial district in a mass of smoke. I will forever remember the eerie feeling of seeing lower Manhattan in a smoky glow. My friends suddenly realized that this would be a tour of New York that they would never forget.

Somehow, someway we managed to get right into lower Manhattan without being stopped and without being questioned. Fortunately, that familiar saying, ‘ignorance is bliss’ applied to me here; I was on a mission and I drove blindly.

As we approached SoHo, we witnessed parts of the Trade Center already being carried away by vehicles. The city, which normally resounds with energy and vibrancy, was so quiet that you could literally hear a pin drop. Finally finding a parking space, we got out of the car. I grabbed the baby stroller and we walked in a complete daze.

My only description would be similar to walking on Holy Ground. Familiar sites were now covered in dust and ash. Destruction was everywhere, and there before us was the shattered Twin Towers in ruins. Red Cross tables were lined up everywhere, and familiar storefronts belied the fact that they were now temporary morgues.

As we walked and prayed, yes, prayed, we were a people united, a people who mourned together and were on a mission to find every missing person who were trapped within the Trade Center.

I can’t recall how long we stayed there but it was a very long, dark day. It is one thing reading about something but it is truly another thing being an eyewitness to the mass destruction.

As the weeks passed the pain never ceased as the death toll mounted, and many people I knew were added to that list. An extremely painful loss was my dear friend Fran and her family and then there was Yolanda Dowling; Yolanda would never again sing for audiences on Christmas Eve at St. Patrick’s Cathedral.

In every way our lives will now never be the same….”

Since that tragic day, my prayers have never ceased for our country and our world. I no longer recognize the world we live in, but I believe that if we are to see any changes in our world, it must begin within each of us, individually, and through God.

In closing, I think of Jill Jackson Miller’s song, “Let There Be Peace On Earth, And Let It Begin With Me”. May her lyrics touch everyone, one person at a time.

Video:
“Let There Be Peace on Earth” is a song by Jill Jackson Miller and Sy Miller written in 1955 performed by country singer Vince Gill.