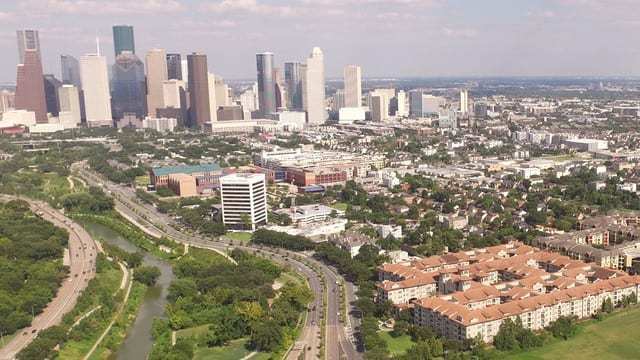 Creeping Sharia grew during the 1960s when the Ismaili communities in the U.S. met with the arrival of Muslim students in every state, especially Texas, many worked or studied at the Texas Medical Center.

For decades, the USA Jamat – aka Islamic Congregations have organized and collaborated with state and local governments, universities, museums, and faith organizations to further develop a greater communications regarding cultural and educational events. Texas leads the nation in spending on social programs per capita, including public education.

Did you know that Houston is home to one of the largest Ismaili Muslim populations in North America?

Houston Texas will soon be the First “ISMAILI Center” in the United States. There are six other centers around the world; Dubai, Dushanbe, Lisbon, London, Tajikistan and Vancouver. Their narrative reads ” The Ismaili Centers are symbolic markers of the permanent presence and core values of Ismaili communities around the world. Incorporating spaces for social and cultural gatherings, intellectual engagement and reflection, as well as spiritual contemplation, they are bridges of friendship and understanding, and serve to enhance relationships among faith communities, government and civil society.”

In 2002, the Sugar Land suburb of Houston built a Ismaili Jamatkhana and Center that cost $10 million, on an 11.5 acre property, on First Colony Boulevard, and was considered being the largest in America.

The “Ismaili Jamatkhana and Center”, was opened, by Governor Rick Perry and Mawlana Hazar Imam. During that address, Gov. Perry stated ” This new Center will leave a lasting imprint on Texas. It will promote the virtues of your faith, it will further the cause of peace and understanding, and it will reflect gloriously upon this Texas we love.”

The Center also serves as the Administrative center for the Aga Khan Council for the United States of America, which oversees the activities of the Ismaili community in this country, more here.

Today, nearly half of all Texans are either African American, Latino, and a swiftly growing Muslim community, who traditionally vote Democratic, talk about strategically and politically transforming the remaining population of Anglos, Asian and Native Americans and others.

In the past, when you thought about Houston Texas, images of oil, cowboys, rodeos, the Johnson Space Center and the Bush family dynasty come to mind, but the American tapestry changes by the day, as Texas Muslim communities are growing by leaps and bounds.

Currently, there is now a new “Mega Mosque” Ismaili Center, on the planning & design drawing table, projected for completion around 2030 for the city of Houston Texas and will be the home of an 11 acre site along the city’s main waterway, the Buffalo Bayou.

The Ismailis state for the record there are about 20 million individuals belonging to the community, hence making this the second largest in the Shiite branch of Islam.

With the creeping of Sharia, many Texan conservatives are watching their state strategically and politically becoming over run by Muslims.

Simply put, Americans are witnessing the transformation of Europe being overrun by religious radicals, Christians who believe in Jesus Christ, the son of God, will NEVER buy into Allah and the Quran, but many countries as well as states are battling the Muslim population explosion.

In life we tend to judge others by the company they keep, as Americans, our experience with the United Nations has grown tumultuous because we have exposed them for what they are, globalists and NWO, just like a thief in the night they are the Trojan Horse, well it appears that the Houston Ismaili Jamatkhana Center and the United Nations have a relationship.

“Please join us as we inaugurate and celebrate the United Nations International Day of Education on January 24, 2019 from 10AM to 12PM at the Ismaili Jamatkhana and Center. In December 2018, the United Nations General Assembly adopted with consensus a resolution proclaiming 24 January as International Day of Education, in celebration of the role of education for peace and development.

President of the United Nations Association-Houston, Daniel Stoecker along with other inspiring students, faculty, and educators will address the audience. “Excellence in Education” themed event will highlight students and individuals, who have made significant difference in the society due to their education. This a free and open to the public event. Light lunch will be provided. RSVP at Eventbrite link.”

The only storm out there is Joe Biden signing radical leftist executive orders. [...]

What good did Donald Trump do that should not be “interred” but should “live after” him?   [...]

America Is (Not So) Slowly Turning Communist Red
23 January 2021

Communism wrapped up in Democrat platitudes takes no prisoners. [...]

Biden's conception of America not only "gets in the way" of national sovereignty, but [...]

The government's idea of freedom sure is oppressive. [...]

Calls for unity are empty coming from a party that spent the last four years dividing people and wil [...]

The 2020 presidential election had massive, organized, discoverable fraud in most of the swing state [...]

Why Joe Biden Will Be the Greatest American President Ever! (If You Believe the Media)
22 January 2021

Soon they will be cranking up the Jackhammers at Mt. Rushmore. A new face is on the way. [...]

Here it comes again: a vain attempt to remake the world to a Western, liberal worldview, under unive [...]

Democrats become the first political party to project their impeachable offenses on a president twic [...]

The ruling class has taken an election, but they’ve substantially weakened their position in doing s [...]

The new U.S. president, a lifelong Catholic, apparently got some help from Rome when a strongly-word [...]

Biden wastes no time; 'trans-ing' of America has begun
22 January 2021

Joe Biden's first day in the Oval Office was a sad day for American women and girls who were [...]

Pro-life activist: We march no matter who is in White House
22 January 2021

While the annual March for life has been cancelled this year in Washington, D.C., some states and ci [...]

A group committed to defending the rights of students and faculty at America's universities has [...]

In his inaugural address yesterday, President Joe Biden called on the country to heal its divisions [...]

President Joe Biden will urge the Democrat-controlled Congress to more than double the federal minim [...]

Despite assurances from medical officials that it is safe to do reopen the area's schools, the [...]

The president of the oldest and largest pro-life organization in the United States hopes pastors wil [...]

The hated, graceful supermodel who never graced a cover
21 January 2021

As supporters say goodbye to Donald Trump, it's worth remembering he is not the only Trump who [...]

As we wrote in “Five Takeaways from President Biden’s Inaugural Address,” In his call for “unity,” P [...]

The Virginia Senate passed a pro-abortion bill Friday that would force state taxpayers to subsidize [...]

How Can They Say Black Lives Matter When 20 Million Black Babies Have Been Aborted?
22 January 2021 - Arnold Culbreath

Jan. 22 is National Sanctity of Human Life Day in America, as designated by President Donald Trump i [...]

In a victory for life Friday, the Kansas House approved a state constitutional amendment to make it [...]

Photo Credit: Pixabay/Pexels JACKSON, Miss. -- A Republican lawmaker and former pastor has filed a b [...]

﻿ (The Christian Institute) -- A private clinic has been heavily criticized for prescribing cross-se [...]

﻿ (The Christian Institute) -- A Nigerian Christian woman has shared how she refused to turn her bac [...]

JOS, Nigeria (Morning Star News) – A professor at a Christian university has reportedly been release [...]

WASHINGTON -- Within hours of taking the oath of office, President Joe Biden signed an order on Wedn [...]

‘In the Strong Name of Our Collective Faith’? Closing of Inauguration Benediction Refuted by Pastor
21 January 2021 - Heather Clark

WASHINGTON -- "In the strong name of our collective faith, amen" was how Silvester Beaman [...]

(The Christian Institute) -- Researchers have reported a medical breakthrough in the quest to revers [...]