Innocent Marines Were Within an Inch of Being Falsely Imprisoned

WHO CAST THE “STAIN ON OUR HONOR”? THE FIRST MARINE COMMANDOS WERE SET UP FOR FAILURE! 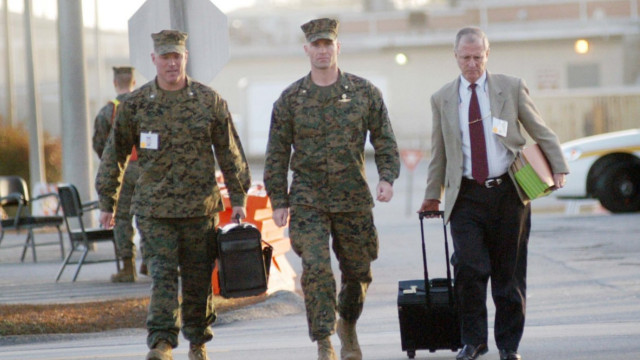 From Left to Right:  Lt. Col. Scott Jack, military council, Maj. Fred Galvin, Fox company commander and Mark Warple, civilian counsel, arrive on Camp Lejeune on Tuesday, Jan. 8, 2007, for the second day of a court inquiry examining a March 4, 2007 incident in which Marines of Marine Special Operations, Fox Company are accused of opening fire on a crowded highway, killing as many as 17 civilians and wounding 50 others. (AP photo, Chuck Beckley)

False Narratives and Accusations driven by the former Bush-Obama Administrations and Appointed Elite Military Generals & Officers, one in particular, against U.S. Marine Special Forces Fox Company at one of Afghanistan’s Terrorist Havens known as Bati-Kot. Innocent Marines were within an inch of being falsely imprisoned.

Over time, a globalist culture has been created by shadow military-political complex forces, covertly aligned from the Battlefields of foreign lands to the migration of streets and communities across America, rewriting our traditions and beliefs through the indoctrination process of our children while erasing American history as a Christian-Judeo Nation.

War is big business and God help anyone getting in the way of the ruthless because they’ll slice and dice you any way they can to ensure their false narratives meet with their agenda’s request.

This nefarious front is very deeply rooted; they calculate and manipulate ways and means to eradicate our Constitutional Rights at every juncture of opportunity while they attempt to strong arm the leader of the free world; President Donald J Trump and the American people. After all, this 45th President of the United States of America is on a mission to drain the diabolical swamps of the military and political complex’s.

It is stated that the very near future promises justice by way of Military Tribunals to take place against the guilty “deep state” bad actors, those who have outworn their uniforms and suits for decades in contradiction of their oaths of high offices and leadership roles, once protected and masked by the powers of their secret cults and societies of communism, marxism, and other unorthodox orders via non American belief systems, that have morphed and threatened the national security of America and our people through the acts of TREASON, TYRANNY and SEDITION.

These divisive tactics arranged by these architects of demise, are the enemies from within, take note of who they are and how they are connected as they are currently being flushed out and exposed by their blatant and sinister plots, for they have poked the sleeping giant in the eyes for the last time. The JIG is up, we know who you are!!

Support for America resonates from the sidelines by those who have birthed a common pain and loss of legacy, it is through a silent rage, shared and echoed among fellow Patriots, Veterans, Gold Star Families, and the awakened American man and woman who possess a moral decency vs moral decay.

It is a lifetime mission by the less than 1% of American Valor to protect and defend our American way of life against those who are defiant and radical in their beliefs.

What we have witnessed through the former administrations are the increased Weaponized words and regulations used in the Rules of Engagement (ROE’s) aka Generals Orders as well as Tactical Directives that have been used against our own men on the battlefield, handcuffing them from being able to defend themselves in war zones. These tragic deaths of our honorable and valorous warriors is also apart of the false narratives these elite ring knockers use to aide and abetting the enemy forces for they share the same secret global agenda.

The crimes that take place on battlefields against U.S.Forces has risen during the Bush-Obama years, it would be interesting to truly know just how many innocent warriors are serving in Leavenworth because of the egregious acts committed against them.

Pro-life activists in Ohio are warning city leaders to stay far away from their First Amendment righ [...]

A California state senator wants religious services to be treated as "essential services" [...]

Creating “sanctuary cities” for the unborn is a growing movement within the pro-life community thank [...]

Americans Think Joe Biden Will be a One-Term President, Might Resign Before Term is Over
4 March 2021 - Steven Ertelt

A new national poll find Americans think Joe Biden will be a one-term president — if he makes it tha [...]

Last week the U.S. House narrowly approved a pandemic relief bill. It should surprise nobody that it [...]

A federal judge extended his block Wednesday on an Ohio law that protects unborn babies from abortio [...]